An adjustable gastric band is a silicone ring with an inflatable portion that is placed around the upper stomach. It is connected via a thin tube to an access chamber inserted in the fat under the skin of the abdomen. The access chamber is filled with sterile water and more fluid added or removed depending on the degree of obstruction and side effects.

At Upper GI West we recognised the importance the gastric band had in the history of bariatric surgery in Australia but we became aware of the limitations and drawbacks early and so did not put many bands in patients compared to the other bariatric procedures we performed.

How does the gastric band work? 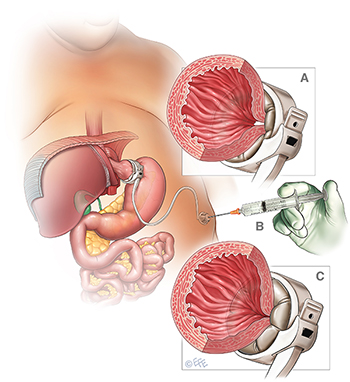 When food is then chewed well and slowly, then swallowed, it moves down the oesophagus (gullet) and then finds it difficult to pass through. On average the food bolus should bounce slightly two to three times before being squeezed through the narrowed area to the remainder of the stomach. This bouncing effect brings about satiety.

Just like any other procedure the gastric band can not prevent calories being consumed nor restrict volume being consumed. It can only bring about a reduction in hunger and earlier satiety.

Only you can reduce the total calories you consume making use of the cues from the band. Unlike the stapled bariatric procedures there are no profound hormonal, thermogenic or receptor changes with the band. Weight loss is thus by radical calorie restriction alone.

Gastric banding is usually carried out using laparoscopy (keyhole surgery). Patients only require a short overnight stay in hospital. It is the simplest surgery to perform for weight loss. However, it is probably the hardest to maintain and has no direct hormonal effect. It is the least effective weight loss procedure on average. It is adjustable by means of fluid injected at visits to your surgeon's rooms. It is removable but not reversible.

What are the advantages of gastric band surgery?

"Gastric banding is a safe initial procedure. The gastric band can be adjusted, which means it is tailored to each patient. In addition, we can remove the band at any point if required. However, it should be noted that removing the band will likely lead to weight regain."

What are the disadvantages of gastric banding?

There are, however, drawbacks to gastric banding. Weight loss can be slower and can be inadequate. Medical complications can include:

What to expect from Upper GI West?

Gastric banding was very popular in Australia with over 97% of all bariatric procedures at one point being band insertions.

However Upper GI West surgeons do not recommend gastric banding for the vast majority of patients as there are more effective options which can be performed safely with fewer long term problems.

"In our early experience we realised that results were not as good as other procedures such as the sleeve gastrectomy and there were significant longer term issues. In fact, sleeve gastrectomy became our most common procedure for obesity management as far back as 2007. Whilst we would still perform gastric band insertion in certain scenarios these would be rare occurances."

We will discuss all your options and answer all your questions as truthfully as we can. We will help you in making an informed decision to have weight loss surgery. We will perform an appropriate procedure based on your wishes, medical history and results of investigations and assessments.