SIPS or SADI Surgery is becoming a more popular weight loss procedure. It preserves the pyloric valve at the bottom end of the stomach. This reduces the risk of diarrhoea and dumping.

SIPS/SADI is the most effective procedure for resolving metabolic syndrome and controlling diabetes. It is the most radical of the intestinal bypass operations currently performed on a regular basis.

What is a SIPS/SADI procedure?

SIPS stands for: Stomach Intestinal Pylorus Sparing. There are many variants which are collectively known as One Anastomosis Duodenal Switch (OADS) or Loop Duodenal Switch.

All these acronyms are used for basically the same procedure:

"SIPS/SADI is the most effective procedure for resolving metabolic syndrome and controlling diabetes commonly performed. It is also the most radical of the bypass operations currently performed on a regular basis. It has gained popularity in recent years as a slightly less radical procedure than a traditional duodenal switch operation and also is technically slightly easier as a second anastomosis is not needed. However, it should never be considered an easy option or procedure."

Studies have shown SIPS to be very effective in weight loss, especially for the super obese. It is also the best at controlling diabetes and metabolic syndrome of all the commonly performed procedures. 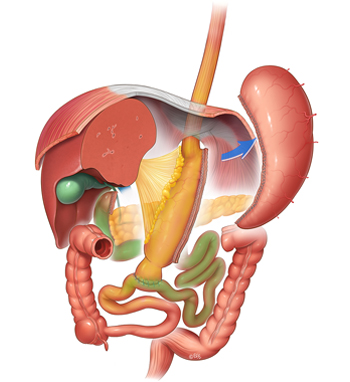 What is different about a SIPS/SADI procedure?

One of the major benefits of SIPS/SADI over traditional or single anastomosis gastric bypass procedures is that your food continues to pass through the pyloric valve. This is the gateway to the intestine and it functions naturally to dampen down the rate of emptying of the sleeved stomach. The net effect is that the extreme fluctuations in glucose levels that are sometimes seen in single anastomosis or Roux en Y bypasses are not seen or are significantly reduced.

The SIPS/SADI procedure also differs from a single anastomosis or Roux en Y bypass because significantly more of the small intestine is bypassed. This causes more extensive hormone and receptor changes leading to better metabolic and diabetic control. The weight loss phase after surgery is typically longer than other procedures and can take 18-24 months to stabilise so long as the dietary requirements are adhered to.

As SIPS/SADI bypasses much more of the small intestine than the other bypasses there are significant vitamin and mineral deficiencies that can develop if supplementation is not adhered to. In addition to standard multivitamins , iron and calcium supplementation there is a need for life long supplementation of Vitamin A, D, E and K (fat soluble vitamins). The protein intake needs to be at least 30% higher than other bariatric procedures or there is a strong risk of protein malnutrition.

"There have been some exciting findings from SIPS studies. One study published in 2017 shows that after two years, patients had lost an average of 89% of their excess weight. And their average BMI reduction was to 26.6.” (Stomach Intestinal Pylorus-Sparing Surgery for Morbid Obesity, Neichoy et al, JSLS, 2017).

SIPS would not normally be recommended for lower BMI patients (BMI < 35) or for patients without metabolic syndrome. We also need to be as sure as possible that you will comply with the nutritional and supplement requirements and return for regular follow up and blood tests before committing to this procedure. A failure to follow instructions and guidelines will cause harm including irreversible dementia and permanent nerve damage."

SIPS/SADI involves a sleeve gastrectomy and a major bypass of the intestine
SIPS/SADI has been found to be more effective than a Single anastamosis or Roux en Y bypass at controlling metabolic syndrome and diabetes
SIPS/SADI reduces the wild fluctuations in blood sugar levels seen with the other bypasses
SIPS/SADI needs significantly more protein intake, vitamin and mineral supplementation lifelong to minimise the risks of permanent injury

What to expect after a SIPS procedure?

The good news for patients is your hospital stay for a SIPS procedure is about the same as a standard sleeve gastrectomy (2-3 days). Your recovery should also be very similar to a standard sleeve with a modified diet for six weeks following your surgery, transitioning from a clear fluids to pureed then soft foods, before a normal diet can be resumed.

You should be able to drive usually between four and 10 days on average, but insurance requirements state you should not be impaired when driving so if you feel impaired do not drive until you are no longer impaired however long it takes. All normal activities should be able to be resumed in two - four weeks.

Why Upper GI West for your SIPS/SADI procedure?

This is the most radical of the more common bariatric and metabolic procedures. It relies on an accurate and well constructed sleeve gastrectomy followed by dissection to free up and access the first part of the duodenum followed by an anastomosis to the area. In this area lies some significant arteries and veins, the bile ducts and pancreas. Injury to any of these structures or a leak from the join or blind end of the duodenum can lead to devastating effects that can be life threatening. Complications need to be minimised and if they occur rapid and aggressive management is required.

As Upper GI Surgeons we were trained to operate in this area including even more complicated surgery for cancer. This area is very rarely accessed or dissected as part of modern general surgical training.

We have extensive experience dealing with emergencies and complications in this area of the body. As we have regularly performed major surgery involving removing the stomach and parts of the duodenum and in some instances the pancreas too, we have the knowledge, skills and experience in managing the recovery from surgery and nutritional issues related to various bypasses.

We pay attention to detail when working you up for your surgery and we will take time and care to accurately and expertly perform your surgery. We definitely do not see this procedure as a simple 20 minute addition to a sleeve as some have suggested! It is so much more than this.